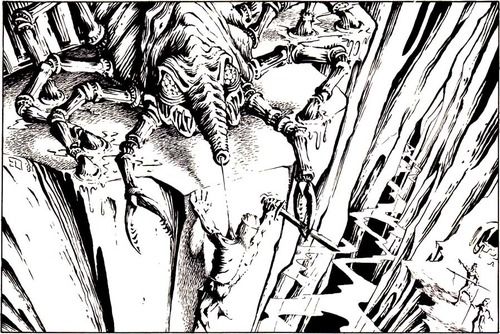 As the party moved towards the chasm which Murf had fallen in Grisha heard the sound of movement from the ceiling. In the shadows at the edge of the torch light a strange insect like creature appeared to be moving above the party. Kosef, Rakham and Talia began climbing down the steep chasm wall. As they did the creature ejected a stream of filament from its trunk which splatted against Talia’s shoulder and chest and pulled her up from the ravine and across the floor directly underneath the creature. The small draconian creature hiding in Talia’s cloak hood flew upward following the strand and began stinging the creature.  Adda rushed to Talia grabbing a hold of her while Kosef attempted to cut the strand which was attached to her but both his weapons became stuck to it. Adda tried to pull Talia’s cloak off and free her from this web like strand but it tore Talia’s skin as she did. Talia lit a torch and began to burn the strand while the rest of the party attacked with crossbow bolts, daggers and Lief burned it with rays of fire. A sting from the small dragon seemed to freeze the creature and after a few more injuries it fell from the ceiling bouncing once and falling into the ravine. Using fire Kosef was able to free his weapons from what was left of the strand.

The party then left Lief guarding the body of Elfhildr and followed the trail of blood, sound of water and the dragon through a passageway that lead to the river, passing two other branches of the cavern along the way. Talia recognized the area from her vision as they party turned left and walked downstream along the river. Soon the river broadened and the current slowed and three dockers were visible, two on same bank as the party. A single wooden rowboat was tied to the first dock. A passageway lead away from the river and dock on the opposite bank. The trail continued down the river and turned to the left and stairs led away from the river near the first dock. Grisha examined the boat and it appeared to be made out of normal wood. 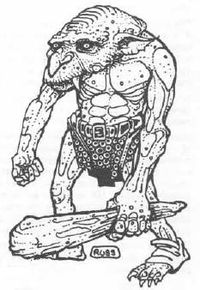 The party then made their way up the stairs and saw the passage opened into a huge cavern with many faint blue light lights scattered around it. The sounds of gruff voices and movement could be heard echoing throughout the cavern and a foul smell permeated the space. Kosef also noticed a bright torch light far across the open cave. As the group debated what to do Grisha heard a sound from behind them and saw there were now two boats tied up to the dock. As he moved back to the group two creatures followed. They looked similar to the creature Talia had seen in her vision carrying Murf. The creatures were carrying fishing poles and fish which they set aside as they drew there weapons. One of them was wearing the hat that Grisha has lost in the river. She carried a war pick. After some gesturing by Grisha that they didn’t want to fight the female creature with a war pick raised motioned for the group to move forward. The party continued with these two creatures following behind them. As they entered the enormous cavern they saw scattered simple stone buildings among rocks and rough ground. There seemed to be several levels the were above the ground floor on the left side and back of the cavern. At the edge of the torch light more of the same creatures gathered and surrounded the party but let them continue forward. Among the sounds of their deep voices Kosef heard the sound of a whimper which sounded human from near one of the closer buildings. Kosef again noticed the torch light which he had seen earlier but it was much closer this time. In the light he could make out a human male dressed in a cloak walking along the upper level with two of creatures from this town. When the man noticed Kosef looking at him he turned away quickly and continued walking

After a few minutes the party approached a set of wide rough steps that lead between an embankment to a higher level. About halfway up the steeps stood a muscular creature standing full head higher then the rest with chain armor and a great sword across his back. He spoke rough common and halted the group asking why they should be allowed to pass. After explaining that they were looking for a smaller companion he said they must speak with The Underlord but he did not agree to let them pass without a “Kotul”.

The crowd grunted in approval and formed a ring as one of the creatures stepped forward holding a great ax. After a brief debate Kosef stepped into the center of the circle and the crowd went silent. More creatures had gathered now and watched in excitement. Kosef crouched waiting for the muscular creature to make the first move. It came forward half cautiously but then raised its ax for a mighty swing, as it did Kosef darted to the side slashing both of his blades deep into the creatures leg.  As it stumbled to keep its balance its ax swung harmlessly past Kosef. The two opponents turned and faced each other again, one grimacing and favoring one leg as the crowd let out what sounded like a deep groan.  Kosef rushed forward again slashing at the creature’s other leg driving his blade to the bone, the creature realizing it could not stop the blow brought its ax in a wide swing slashing deep into Kosef’s back as he tried to spin away. The crowd gasped and roared as Kosef turned to face the creature again, his grimacing in pain. The creature stared back, both legs weakened and bleeding badly.  With a burst of speed Kosef leapt backward away from the creature, taking both swords in one head he brought a dagger from his belt and flung it toward the creature sinking it into his chest. The creature clutched the dagger and pulled it from his body not realizing he was already dead…

The rest of the creatures groaned, while a few grunted. Kosef picked his dagger up from the ground and handed the creatures great ax to Adda. Grisha rushed forward and packed Kosef’s wound with healing paste as Kosef coughed up a little blood. Then Grisha boldly approached the creature who wore his hat and tried to take it. As he did she drew her war pick but he managed to retreat quickly.

The party was then lead up the stairs and across another area scattered with larger buildings and up a ramp into a chamber partially built into the back of the cavern. There another of these creatures with protruding teeth in his lower and upper jaws sat on a large chair made of broken wooden parts. It easily stood over 6′ tall and its broad muscled body was covered in a thick layer of fat. The Underlord as he called himself asked what price they would pay for Murf in broken common. Another of the creatures, dressed in a cloak watched the party and seemed to advise The Underlord. The party placed a vial of blood, several giant lizard scales and some gold and silver on the table and the Underlord agreed on the price and told them to leave and not return unless they brought slaves.

The party lifted the unconscious Murf and hurried out of the cavern followed by the first two creatures who they had encountered. They seemed to be upset and arguing with the larger creature with the great sword. Grisha managed to speak with female creature and offer silver for his cap which she took and then left. As they reached the river they heard splashing of oars in the water and saw the faint light of a torch moving away from them down the river.

The party backtracked and retrieved the bodies and found Lief and Elfhildr waiting for them at the first river. Kosef returned the mushroom Grisha had taken to Lief and negotiated for Lief to try and arrange a meeting with Deline Darr. Together they managed to make their way across the rivers and back out of The Underfarms. There they brought the bodies to the temple and made their way to The Helping Hand to rest for the night. Lief said he would try and contact Kosef at The Helping Hand in a few days.