Search from the Dead

Continued deeper into the tunnels, passing through several caverns. Saw a dead familiar squid like creature with five eyes and long tentacles which was being eaten by beetles. Killed one of the beetles and they fled. Investigated corpse and saw it was slashed to and pierced by an arrow, not killed by the beetles. Continuing they came to a river with a rope tied across it. Grisha fell while crossing the rope and almost drowned. The party was able to pull him out of the water but he lost his hat.

The party rested on the other side of the river and were attacked by a stalactite, several others moved so the party moved into the cover of the passage way. 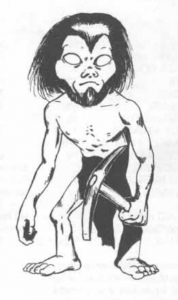 As the party continued they came to a junction in the passageway which split in four directions.  Kosef lead the party straight following his vision to a solid stone door which seemed to be barred from the other side. With a handle but no visible lock or later Adda and Rakham tried to force the door open but were unsuccessful. The party backtracked and went to the left at the junction. As they moved through the irregular passageway Kosef noticed a small opening  on the right near the ceiling. This vision now showed this as the path he should take. However it was a small opening so they hoisted Murf up to it. As he crawled forward the sounds of metal hitting stone grew louder until the rock opened up above a huge natural cavern bigger than his vision could see.

Murf could make out six humanoid creatures smaller than a dwarf but bigger than a halfling They were stocky with huge eyes, dressed only in shorts and small tops as they mined ore from various parts of the cave and loading it into carts. Several other taller elf like creatures with huge eyes, long straight hair and sagging skin watched over the carts which were attached to six-legged beasts which pulled the carts away when they were filled.  However the way forward was blocked by metal bars so Murf climbed back to the party and told them what he had seen. The group continued forward through the tunnel and shortly came to stairs the lead down and to the left. Again Kosef’s sight showed him that this was now the shortest path. At the bottom of the stairs the corridor continued forward but was blocked by a portcullis. A smaller tunnel lead off  this one and climbed to a small opening about 20 feet above the cavern farther left. From there another door was visible which lead out of the cavern and in the direction which Kosef could see the group needed to go.

The party discussed what to do next and decided to return to the portcullis and try and talk to the strange creatures of this hidden world.