Leaving Taegan’s hut Murf, Rakham and Adda went to the pool after Murf dreamed of it during the night. At the pool he saw an image on the surface of a older being sitting in a throne of  an old tree, below him the pale lady and another pale creature sat. Murf’s eyes met the older being and then he saw Tordan flourishing, lively and then suddenly he say it change quickly falling into ruin. Then the pool surface cleared and he saw a book under the water. Adda held him over the surface as he reached down, grabbed it and pulled it out. The book was dry, untouched by the water. Then they walked to the temple of Nian.

Talia spent the previous day training with Egel after speaking with Idunn about joining the temple. The next morning Adda joined her and they trained for the first half of the day while Murf read his book. When Talia and Adda finished their training they found Murf and Talia looked at the book Murf was reading. She was immediately drawn to the book. She heard a voice in her head asking her to join the Ward King.

Grisha remained behind and spoke more with Taegan, asking if Taegan could teach him more or help him befriend animals. Taegan said you must prove you are an agent of balance and nature. Then Grisha returned to The Helping Hand and met with Kosef there. Soon Talia, Murf and Adda joined them. Kosef explained what he remembered happening in Weyfort and what he knew of the Shagar.

Then the party went to check on the poster to see find the name of the woman who was wanted for killing her family. While reading the poster they noticed Laney Darr watching them from an alley.  Kosef and Adda approached her and Kosef offered her a deal, he would turn the wanted woman, Erika Brandvell over to Laney and she would forget about Talia. She agreed if he included the difference  in the bounties which was 150gp, they settled on 100gp but said he only has 5 days.

Next the group went to The Temple of Elil and agreed to retrieve the bodies for them in exchange for the dropping the charges against Rakham and Murf. The priestess cast something on Kosef and he could feel which direction would lead them to the bodies. They headed to the underfarms.

Traveling down past the Underfarms they turned right and passed through a guard post manned by two Trihill Patrol guards. They opened the portcullis for them and said if they got into trouble retreat to the gate and they would try and support them.

The party descended deeper passing several tunnels in which Grisha marked their path at each junction. After what seemed like at least two hours the tunnel opened up into a large cavern with scattered giant mushrooms growing throughout. Making their way through the mushrooms a violet colored one sprang to life attacking the party with tendrils. It manages to hit Kosef once before it was killed by a dagger, several sword strikes, a hurled ball of fire and a great ax split it in half.

The party noticed a cut mushroom stock as they continued and then another one. Soon they saw a new mushroom which Murf recognized as the same type as the cut stock.  Kosef hurled a dagger at the mushroom and it began emitting a ear piercing sound. After a few more attacks the mushroom collapsed to the ground and fell silent. 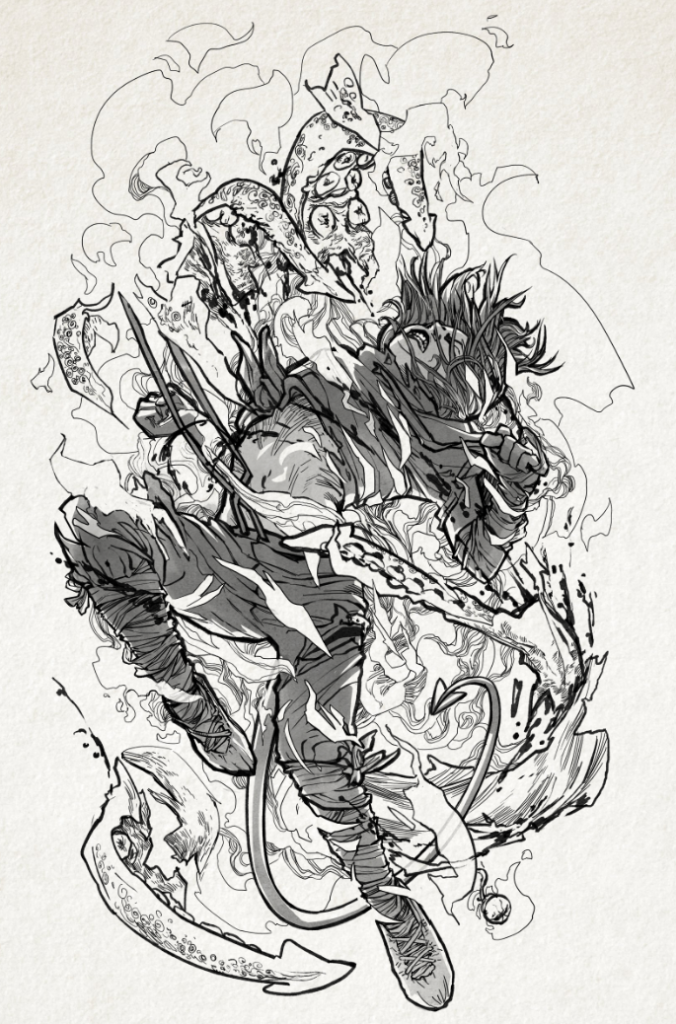 As the party continued the cavern became tall and narrow, like a fissure. After a few minutes a flapping sound above caught their attention darkness descending on them engulfing Talia. In the darkness Adda slammed her ax into a stalagmite breaking the handle in half. As the creature tried to fly off with Talia she released a burst of flame killing the creature and dropping her back towards the ground. Murf tried to catch her but ended up on the ground as well in a heap.