As Adda left The Helping Hand two armed guards approached, both dressed in the brown and gray of the Trihill Patrol. Their shock at seeing a Tiefling passed quickly and they nodded and continued past towards The Helping Hand. 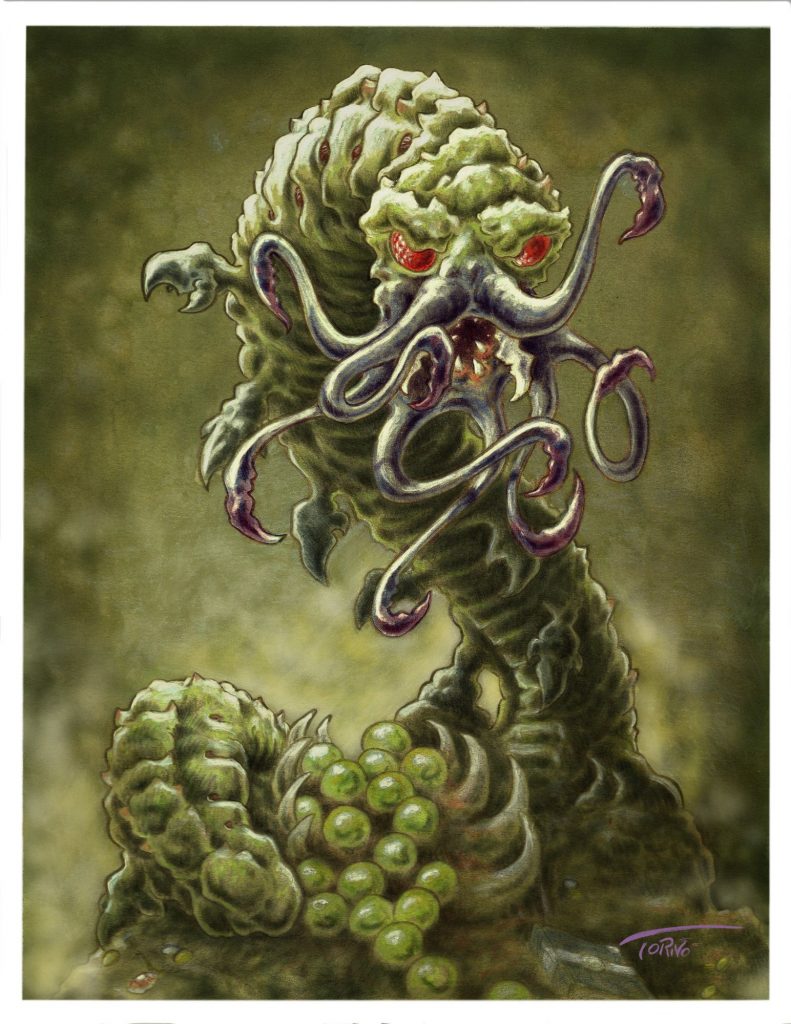 Soon after Murf, Rakham and Grisha had fallen asleep in the upper level of a ruined building Grisha had been staying in for the last few days Murf and Rakham were awaken by George yelping. Murf looked up to see a toothy maw surrounded by writhing tentacles above him. He used his fey presence but it didn’t seem to have an affect, then as he tried to roll off the platform he became tangled in his blanket and only managed to bump into Rakham. The creature climbed down the wall above the three companions and on of it’s tentacles stung Murf through the blanket. Rakham grabbed Murf and Grisha and rolled of the platform, as he did he lost his grip on Grisha but managed to pull Murf with him. While Rakham was able to land on the ground gracefully, Murf fell flat in front of him. Rakham then ducked under the platform that he had been sleeping on mere seconds ago drawing his sword and shield.

Murf scrambled to his feet and rushed out of the ruined building onto the street but as he did Rakham watched the segmented body of the creature with its numerous legs climbed down from the platform and followed Murf across the ruins catching up to him just outside the doorway.

As Adda walked through the dark streets of Tordan she heard the cry of a familiar voice in the distance to her right. She turned and rushed down the street towards the sound. As she approached she saw Murf coming out of the doorway on the side of the street. As he did a creature with tentacles standing just a bit higher than Murf emerged from the building biting into his side almost engulfing him in its tentacles. She dashed forward and slashed the creature with a glancing blow from her great ax. Rakham attacked the rear of the creature gashing it with his short sword. Murf broke free and protected himself with armor of cold energy. The creature followed, striking Murf with a stinger like end of its tentacle. As it did a blast of cold energy released from Murf’s wound driving the creature back but it quickly turned and bite Adda raking down her shoulder and arm with its teeth.

Adda grabbed Murf, picking him up and retreated up the street away from the creature. The guards she has seen earlier ran towards her from The Helping Hand and continued to the building. Murf magically ignited a small fire under the the creature but it pulled back quickly. Then it turned, moving towards Rakham and attacked him, stinging him once. Even in his weakened state his dwarf blood resisted the poison.  He backed away from the creature, moving out of the ruined building. The two guards reached the doorway and attacked the creature with their spears hitting it twice. The creature turned and climbed up the wall over the building as Rakham hit it with a crossbow bolt and Adda with one of her hand axes. The creature disappeared over the wall and into the darkness.

As Adda asked the guards to keep watch as she found Grisha and carried him back to The Helping Hand. Murf and Rakham searched the next building over and found a burrow with a trail of blood into it. Murf slide in crashing to the bottom and Rakham followed behind. Following the small burrow in a crouch Murf crept around the corner and spotted the creature looking at him. It rushed forward at him but he managed to evoke a small fire in front of himself and the creature turned and disappeared from view.  Murf extinguished the fire and him and Rakham caught the tail of the creature retreating through another tunnel. The floor of the room had scattered bones, coins, rotting clothing and leather. Rakham and Murf gathered up the coins and returned to The Helping Hand.

Grisha woke up and Adda led him to her room in The Helping Hand before she made her way to The Temple of Nian. Rakham and Murf snuck into their room and rested the night there.

The next morning Grisha and Rakham wounds had gotten worse. Grisha headed to the temple to seek help while Rakham and Murf went to ask around town for a healer. Grisha made his way to the Temple of Nian first. There he met with Arnaka and Adda who had been training the using of healing spells. Even Arnaka took a sharp breath when Grisha revealed the wound in his shoulder.  He cut a split in Grisha coat and inspected the wound showing Adda the dark pattern extending from the wound and the red puffy areas around it. He also noted the temperature of the skin around the wound was very hot. He told Grisha that the temple could save him if he agreed to pledge an allegiance to Nian. Grisha asked a few questions about the pledge but decided against it when he saw the ritual bowl with some type of binding runes on it. Arnaka warned him that he would die in a day or two without magical treatment. Arnaka instructed Grisha to keep applying the healing salve saying it would give him more time.

Rakham and Murf headed to the east market noticing two new posters along the way. One was for the woman who murdered her family and offered 200gp for her capture. The other was for the head of a flying beast hunting the road to The Dwarf Wilds. It was described as a winged beast covered in spines which was attacking horses, oxen and humans along the road. They continued to the central market and Ilka’s blade. She was busy working on another high quality great sword. When she took a break Rakham paid her 2gp for the space and told her he would not be working there anymore. She said he was welcome to come back and work as they had extra smith work. He asked if she would be interested in the Chalcedony gems they had found and she recommend he try The Finest Gems down the street.

They found a small wooden sign, the corner broken off. Pushing the door open it hit something inside but they managed to squeeze into a small stuffy room littered with scattered books, small boxes, cloth rags, pouches, several small tables and magnifying lens. A middle aged Halfling looked up at them, her thick brown curly hair was shoulder length and a bit disheveled and she was dressed in a green vest and trousers with several pockets. She was friendly and spoke in a squeaky voice and her name was Tyme Reedfellow. Rakham managed to haggle the sale of the three Chalcedony gems for 8pp and agreed to return if they had more gems. When asked about any other healers Tyme got uncomfortable but quietly told them about a healer who lives across the Summer Bridge on the left just passed a huge tree growing out of a building.

Meanwhile Grisha slowly made his way to the Temple of Eiah, there he met with a healer but was unwilling to commit to this temple either and made his way back to the temple of Nian. There he and Adda left the temple and encountered Murf and Rakham as they passed the central market. The group decided to go and seek the aid of Taegan. 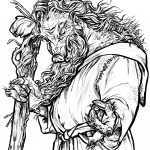 After an hour and a half they arrived in Taegan’s glen. He grimaced looking at the wounds and instructed the party that they needed the powder of two small diamonds to heal these wounds. The party then returned to The Finest Gems. Tyme seemed quite happy to see them except for Adda whom she seemed a bit concerned about. She managed to find a small diamond which they agreed to purchase for about 200gp in coins and the gold cloth ribbon and leather belt set with Malachite gems.

Returning to Taegan just before nightfall with the gem Taegan invited the party into this hut which lead to a elegantly shaped underground living quarters. There he began the preparation and rituals and in the morning he pulled a black smoke from both Grisha and Rakham and healed them of most of their wounds.

This entry was posted in Adventure Log, Aneeria, Tordan. Bookmark the permalink.