In the morning at The Helping Hand Murf took a bath and Grisha ate breakfast with George. As Murf emerged from the bath room he overheard a woman speaking with Dagmar about the wanted posters. She left three posters with him and said she would be back in two days. The posters showed 350gp reward for Talia, 150gp for Rakham and 100gp Murf.  Dagmar warned the party that Laney Darr would return in two days and she should be taken very seriously. After much discussion the party decided to have Dagmar go speak to the Temple of Elil on their behalf. Then they headed for the island.

Heading south to the river the party spotted an old Temple across the river and thought about investigating but continued up river toward the island. After passing the summer bridge they noticed a trail of something large dragging along the same trail. It branched off after about ten minutes and they saw large round footprints. They continued to the island and noticed the boat was no longer at the shore but was on the island. Grisha turned into a bear started swimming toward the island with Adda. As they did Rakham noticed three giant flies circling above the ruined keep. 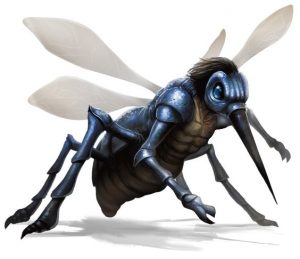 Rakham fired his crossbow at one of them striking it, then the three creatures flew across the lake toward the group. Murf put the largest one to sleep after it had been hit by Rakham’s crossbow attacks, and it fell into the water. The other two attacked Rakham and Murf as Talia went unconscious from the terrible sound of these creatures. Adda and Grisha managed to swim pack to shore where Grisha attacked the fly attacking Murf and Adda joined Rakham fighting the other.

Grisha hit the strange armored fly which was the size of a large dog with his claws and teeth before it stabbed him just below his neck with its pointed proboscis. The dagger like point sunk deep into his shoulder as his form changed from a bear back to a human. Murf was able to stab the fly twice his his knife.

Rakham and Adda hit the other fly several times but Adda accidentally hit Rakham and herself in the process. Then it stuck Rakham with its dagger like beak injuring him badly. A black spiderweb like patter spreading out fro the wound. As the injured creature struggled to fly after another strike Rakham struck a clean blow separating its head from its body.

Then out of the water the first and largest fly emerged but before it could attack a terrible bird like cry from the island called both the surviving flies back across the water.

Murf managed to awaken Talia with a hard slap from her half conscious nightmare like state. Then the party hide under some thick foliage and rested for an hour. Grisha tried to heal his wounds with good berries but they had no affect. Rakham’s wounds also would not heal.

After rested for an hour the party returned to the three hills.  Talia took Murf and Rakham went to the temple of Nian and met with Arnaka but Rakham refused treatment at the Temple of Nian when told he would have to swear not to go to the other Temples. After meeting with Arnaka Talia stayed at the temple while Rakham and Murf returned to near the Helping Hand but went to Grisha’s hovel instead.

Adda went to the Helping Hand where a master bard was playing for a packed room. His name was Doran the Wanderer.  While Adda listened to he music Dagmar caught her attention and said he has spoken on their behalf with the Temple of Elil and negotiated an agreement for the Temple to drop all charges against Murf and Rakham. In return they would retrieve two bodies from the Underfarms. Dagmar said they could get more details at the temple if they agreed to the terms. After playing for some time Doran took a break and Adda approached and spoke with him for a bit about his travels and his tricks for staying alive that he had learned in the dungeon of the Tower of Knobs. It grow dark more quickly than expected and Adda left the Helping Hand to return to the Temple of Nian as darkness fell across Tordan.

This entry was posted in Adventure Log, D&D 5e, Tordan and tagged #dnd. Bookmark the permalink.